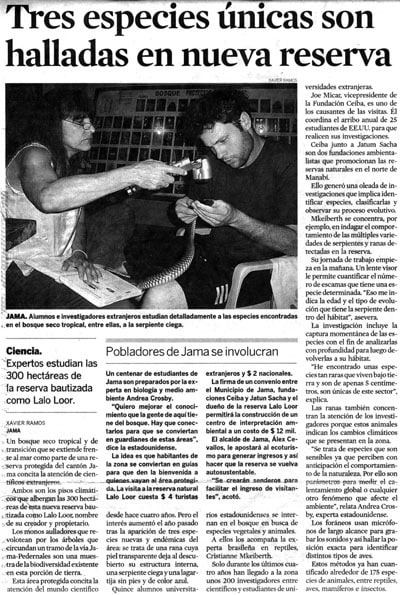 Jama Foreign students and researchers study in great detail the species found in the dry tropical forest, including the blind snake (sic).

Experts study the 300 hectares of the reserve baptized as Lalo Loor.

A forest dry, tropical, and transition that extends facing the ocean as part of a reserve protected by Jama canton calls the attention of foreign scientists.

Both are the climatic steps that harbor the 300 hectares of this new reserve baptized as Lalo Loor, named by its creator and proprietor.

The howler monkeys that gambol through the trees that encircle each leg of the Jama-Pedernales route are an example of the existing biodiversity in this portion of land.

This protected area has called the attention of the scientific world for four years. But the interest grew last year with the appearance of three new species endemic to the area: a frog whose transparent skin allows the discernment of its internal structure, a blind snake, and a legless lizard, blue in color.

Fifteen American university students stayed at the forest in search of plant and animal species.

They were accompanied by the Brazilian reptile expert Christiane Mouette.

During the past four years alone, 200 foreign researchers and university students have come to the area.

Joe Micar, vice president of Fundacion Ceiba (Ceiba Foundation), is one of the causes of the visits. He coordinates the annual arrival of 25 USA students so they can conduct their research.

Ceiba in conjunction with Jatun Sacha are two environmental foundations that promote natural reserves in the north of Manabi­.

This generated a wave of researchers who set about to identify species, classify them and observe their evolutionary process.

Mouette concentrates, for example, on investigating the behavior of the multiple varieties of distinguished frogs and snakes in the reserve.

Her work journey begins in the morning. A loupe permits her to quantify the numerous scales of a given species. “This tells me the age and type of evolution that the snake has within its habitat”, she asserts.

The research includes the momentary capture of species with the goal of analyzing them in depth to later return them to their habitat.

“I have found some species so rare that live beneath the soil and are barely 5 centimeters in length, they are the only ones in this area”, she explains.

The frogs also focus the attention of the researches because these animals indicate the climatic changes that are seen in the area.

“We’re talking about species that are sensitive so they perceive ahead of time the behavior of nature. That’s why they’re parameters for measuring global warming and any other phenomenon that affects the environment”, relates Andrea Crosby, an American.

The foreigners use long-distance microphones to record sounds and thus find the exact position of different types of birds to identify them.

These methods have already quantified around 175 animal species, including reptiles, birds, mammals and insects.

Villagers of Jama get involved

A hundred Jama students are prepared by the biology and environmental expert Andrea Crosby.

“I want to improve the understanding that the people from around here have of the forest. One must connect with them in order to convert them into guardians of these areas”, says the American.

The idea is that inhabitants of the area become guides so that they welcome whoever goes to the protected area. The visit to the natural reserve Lalo Loor costs $4 for foreign tourists and $2 for national tourists.

The signature of the accord between Jama town, the Ceiba and Jatun Sacha foundations, and Lalo Loor reserve will permit the construction of an environmental interpretation center at a cost of $12,000.

The mayor of Jama, Alex Cevallos, will bet on ecotourism to generate income and thus have the reserve become self-sustaining.

“It will create paths to facilitate the inflow of visitors”, he assures.