Global warming has impacted survival in often unsuspected ways. For instance, sea turtles lay their eggs on beaches, depending on certain environmental temperatures for them to incubate. If the eggs incubate at too low a temperature, all the hatchlings will be male; at too high a temperature, all will be female. With rising temperatures, that means that there is a scarcity of males, which in turn means that some females will not be able to breed. Combined with other troubles that sea turtles face with fishing and egg-collecting, global warming might make the difference between species survival and not.

Global warming is hitting amphibians especially hard. Partly since frogs and salamanders have unprotected skin, they are particularly prone to environmental changes. Also, many frogs and salamanders have extremely restricted geographic ranges; sometimes a species is found in just one locality. This can mean trouble for those species restricted to single mountain tops. For instance, we have identified over 15 species of frog on a single mountaintop in western Ecuador that are both new to science and found nowhere else in the world. They are found in could forest, that is always cool and moist. With climate change, many of these mountaintop habitats are expected to disappear. Whereas at lower elevations, if things heat up, animals can potentially migrate to cooler climes up slopes, at mountaintops there is nowhere cooler to get to, and species can become extinct in short order. 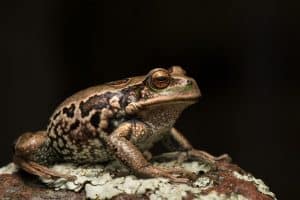 Climate change in the form of human-caused global warming is perhaps the most serious threat to species survival in the last 10,000 years. Across the globe, shifting climates have meant that plants and animals have had to shift their distributions, habits, or habitats, or else die. Extinctions from human-caused climate change are mounting, and many more are on the horizon.

Reduce your emissions! To stop and ultimately reverse the effects of climate change, we need to make a lot of changes, some obvious, some not what you would expect. Did you know that the most important step you can take to curb global warming is to cut meat from your diet? Beef is particularly bad, since cows emit methane, which is a powerful greenhouse gas, and huge areas of rainforest have been destroyed for cattle pastures. Since the forest holds carbon, when it is cut down for cattle pasture, that carbon is released into the atmosphere that can further warm the planet.