We borrow the best principles from art and science to accomplish our central goal: document the diversity of life.

We are part of a fundamental shift in philosophy in field ecology and taxonomy. Traditionally, when one wanted to document the presence of a particular species at a given place and time, a “voucher” specimen of an entire animal was taken. Sometimes scores of individuals from each species of plant and animal at a site were killed, preserved, and stored in museums for future generations to study. However, this method was crucial for the development of biology as a science.

For instance, when Darwin visited the Galapagos Islands, he shot and preserved a number of peculiar songbirds. He knew nothing of them, but brought the specimens back to England, where they could be studied extensively. It wasn’t until years later that he would reexamine his specimens and come to a startling conclusion: they were all finches, but each adapted to fill a particular niche by the shape of its beak, eating small or large seeds, nectar, or insects. Indeed, you can still see the finches Darwin collected 177 years ago. 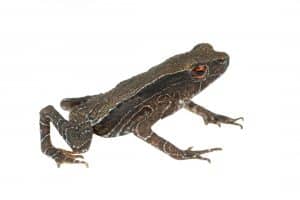 While extensive specimen collection had its place, nowadays we rely less and less on specimens of whole animals, and more on other, often more powerful methodology. One way we are doing this is with the scientific research tool IDENTIFY which is a powerful scientific research tool which allows us to document the most important characteristics of a live animal. Another is analyzing DNA with tissue sampling, or even genes found in the environment–eDNA. However, the perhaps most powerful tool for documenting biodiversity is photography. When we take a photo of an animal, that image serves as a â€œvoucherâ€, much as Darwin’s dead birds did. However, this virtual specimen is in some ways even more valuable than a whole animal. It can preserve colors, textures, postures and shapes that are degraded and disappear during the process of chemical preservation. Indeed, a preserved frog can bear little resemblance to a live animal. Another powerful advantage of photographic vouchers is their accessibility. A whole preserved specimen must be housed in a physical place; to study it requires either a researcher to travel great distances or a valuable specimen to be shipped, risking damage and loss. The ability to send a virtual specimen to anyone, anywhere, is a huge advantage. In fact, photographs are now deposited into museum collections and researchers around the world are given free access.

However, there is still a crucial role for whole specimens: new species descriptions. For now, we must base a new species description on a series of preserved specimens. While this practice can seem counter to conservation goals, and is considered distasteful to some, a few animals is a small sacrifice to gain knowledge of their existence. Indeed, for a species to be considered endangered, and thus protected, it must first be recognized by science as a species. Virtually the only way to do that now is by taking a few specimens. However, changes are on the horizon in this respect: a new species of bird was recently described from a feather (with DNA), a recorded call, and a photograph.

You can play your part by attending one of our Conservation Photography Expeditions.

All photos on this site and thousands more are available as fine art prints and stock photography.