Amphibians are the oldest tetrapods, or four-legged animals, and appeared on land for the first time over 350,000,000 years ago. Salamander-like creatures emerged from the water, having descended from fishes that evolved bones in their fins for navigating underwater obstacles. They are numerous on every continent except Antarctica.

Today, amphibians are represented by three major “orders”. Of the more than 6,600 described species of amphibian, there are about 5,870 frogs and toads (Anura), 585 salamanders and newts (Urodela), and 185 species of wormlike caecilians (Gymnophiona). Our own discoveries will add at least 30 names to the list of known amphibians. Sadly, there are now some 170 species extinct in the wild.

By far the greatest diversity of amphibians occurs in the tropics, between 23.4 degrees latitude on either side of the equator. For instance, in the small tropical country of Ecuador, there are 485 species of amphibians, more than all of the United States and Canada combined.

One trait that unites all amphibians is that they have relatively permeable skin, and they can breathe and sometimes even drink through it. This leaky skin unfortunately leads them to be especially susceptible to toxins and other environmental stressors. The name “amphibian”, which means “two lives” in Latin, refers to their double life both in and out of the water. The typical amphibian life cycle starts in the water with eggs that then hatch into larvae — tadpoles, in the case of frogs — which metamorphose into adult form. The adults can live relatively independently of water for extended periods of time, and in some cases, like the spadefoot toads of the southwestern United States, they can remain underground nearly an entire year without water. But even the spadefoots need to return to water to breed and complete the life cycle. However, amphibians with more derived life-histories, like that of the rain frogs (see below) need never go to water.

One surprising characteristic of frogs is that they can be excellent parents. For instance, the poison frogs of the family Dendrobatidae will lay their eggs in small pockets of water in epiphytic plants such as bromeliads high up in rainforest trees. The eggs and then tadpoles are fairly safe from their would-be predators like fish and aquatic dragonfly larvae. But being safe from being eaten also means that there isn’t much to eat. The solution of to this problem is provided by the parents, one of which — usually the male — will scoop the tadpoles up on its back and take them to another, more fruitful, bromeliad. In some species, the female will come back to the same bromeliad that she laid eggs in earlier and feed the hungry tadpoles more of her eggs. These examples illustrate just a few of the amazing adaptations that amphibians have used for hundreds of millions of years to get by in a myriad of places in a myriad of ways. 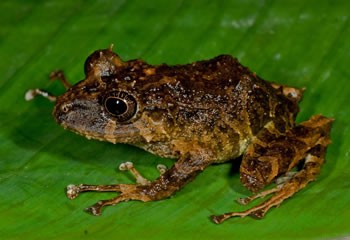 Making up nearly 90% of all amphibian species, frogs and toads diverged from the ancestral amphibian body form to have long back legs used for jumping, hopping, leaping, or sometimes walking. Although most species lay eggs in the water, some, like this rain frog, lay eggs in trees that hatch into small froglets, bypassing the tadpole stage. 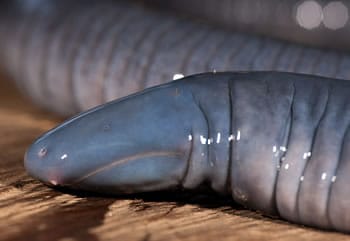 The bizarre wormlike caecilians live either mostly underground or underwater. Having evolved in dark habitats, they have almost completely lost their eyes, and instead have a sensory tentacle, the tip of which is shown here just in front of the mouth. The roughly 185 species of caecilians are nearly all tropical in distribution. 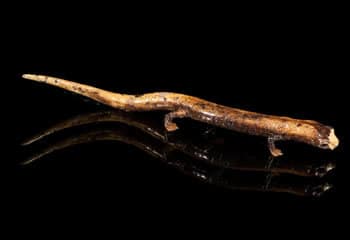 Salamanders represent the most primitive amphibian body form. Bucking the trend for biodiversity, there are many more species of salamanders in temperate regions than tropical ones. South American species are relatively few, and limited to a family of lungless salamanders like this one.

Our own discoveries will add at least 30 new species of amphibians to the total known, which will assist in making ecosystem management and endangered species recommendations.

Keep learning about amphibians! Keep informed about what is happening with these remarkable creatures. And consider getting involved with TBG or other organizations that are working on the front lines gaining knowledge of amphibians’ unique biology.