Our Ecuadorian study sites span an enormous range of climates and ecosystems on both sides of the Andes Mountains.

Rio Bigal Biological Reserve is situated within the ecotone between the eastern slopes of the Andes and the Amazon Rainforest, and the site is home to unique fauna and flora. In the time since we first started conducting surveys of the herpetofauna at Rio Bigal in 2009, there have been nearly 100 species of amphibians and reptiles recorded, including several candidates for species that are new to science! Make sure to watch our video from this site. 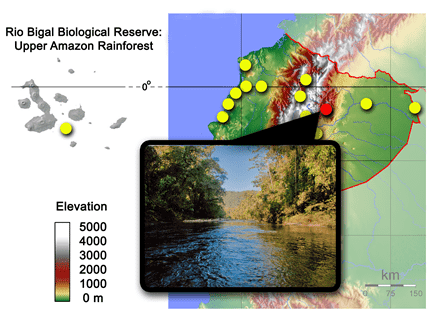 Our southernmost sites are near the coastal town of Jama. This area contains some intriguing habitats, including rare dry forest, of which over 95% has been cut down for cattle grazing. and

we have found at least one suspected new species there: a slug-sucking snake. 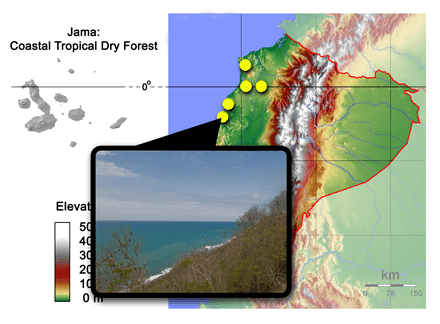 Lalo Loor and Jama-Coaque reserves, located on the coast and sitting just south of the equator, include tropical dry forest, tropical humid forest, and even cloudforest. The reserves are a patchwork of all three habitat types as well as disturbances caused by roads, banana and lime fields, and cattle grazing. Thus, the opportunity is afforded to examine the multiple influences of habitat and disturbance on animal distribution and abundance. Also, much of the habitat in and around the reserves is composed of former pastureland which has been allowed to revert to forest, with the assistance of revegetation efforts. This scenario also allows the chance to examine ecological succession on reptiles and amphibians, and to determine whether the forests are able to return to previous levels and types of biodiversity after ecological disturbances.

Cero Pata de Pajaro, represents a large remnant of tropical humid forest/cloud forest transition. We hike into this site, with the help of pack mules for a grueling two hour hike through mud up slippery slopes. As we climb from lower elevation humid forest to higher elevation cloud forest, there are drastic changes in flora and fauna, with more frogs, ferns and bromeliads. Because the cloud forest on the upper reaches of the mountains has been isolated from other such forests for thousands of years, it is likely that there are unique species found there. In fact, our latest foray to the top of the mountain yielded more than 20 species of frog that are likely new to science. 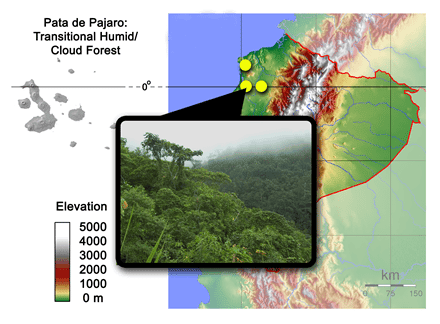 La Perla represents a remnant of tropical humid forest (a type of rainforest) that once stretched for a hundred miles or more. The forest contains both primary (old-growth) and secondary (successional) forest. Although these are rare and disappearing habitats, there is some excellent forest remaining, and we have found a great diversity of species. Indeed, one recent foray deep into the forest yielded seven species that were new to us, including the Chachi Frog (Hypsiboas picturata) and the Western Basilisk (Basiliscus galeritus). At La Perla, conduct variable and fixed-length transects on forest edges as well as deep in the forest, sometimes by wading hip-deep in creeks for hours at a time. 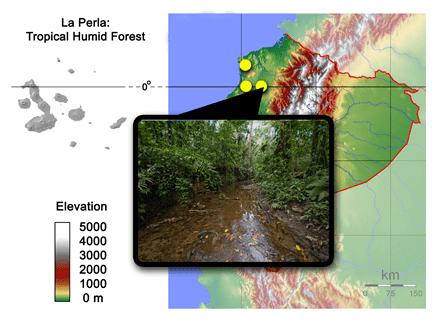 Congal Reserve contains some of the last remaining mangrove forests on the coast of Ecuador, but we work mostly in the humid forest inland. In our latest expedition there, we found a bushmaster: an enormous venomous viper. Virtually nothing is known about the reptiles and amphibians there, and discoveries await!

For its size, Ecuador is the most biodiverse country on earth. It holds about 8% of all the species of amphibians on Earth and 16% of bird species–all in a country about the size of Arizona!

Many tropical ecosystems are under dire peril–our study regions in western Ecuador are over 95% deforested.

You can help with this important work