Exploring areas where virtually nothing is known about the reptiles, amphibians, and invertebrates inevitably leads to some exciting discoveries. For instance, this is a snail-sucking snake of the genus Sibynomorphus that we captured in the dry forest in western Ecuador. We arrived on this site at 7:38 PM. By 8:00 PM, we found this snake, which may be an entirely new species to science.

Frogs such as this species of Pristimantis are numerous in some extremely rare and rapidly disappearing habitats. We have over 30 species of these frogs for which we have been unable to identify to species. Many are likely new to science, but without our efforts they might be lost before ever being discovered.

We have amassed over 800 species of unidentified invertebrates as part of our work in Ecuador. We are now busy identifying them, and have already identified four new species and a new genus of stick insect known only from our photos and specimens. 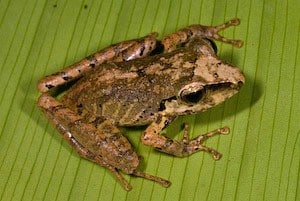 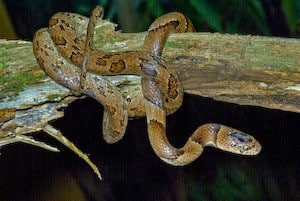 For its size, Ecuador is the most biodiverse country on earth. It holds about 8% of all the species of amphibians on Earth and 16% of bird species–all in a country about the size of Arizona!

Many tropical ecosystems are under dire peril–our study regions in western Ecuador are over 95% deforested.

You can help with this important work